This D&D setting taps the old “mythological theme park” of ancient cultures and classic fantasy tropes: the fall of Atlantis, pantheons of mischievous gods, nations of human and non-human peoples, the struggle between order and chaos, and lands conjured out of dreams. This world is a vast flat circle of land – who knows how deep or thick – forever dissolving into pure mental notions and nothingness at its horizons.

In the stable section of the demiplane’s center, lineages, classes, technology, and magic all follow the basic “default” rules found in the D&D Player’s Handbook: Roughly on par with 14th/15th century Europe and North Africa (Late Middle Ages/Early Renaissance), but with no Roman Empire/Christianity/Catholic Church to supplant previous cultural traditions – and, of course, lots of open magic and fantasy creatures still roaming around. Once travelers head away from this center… things get weird.

MAGIC & RELIGIONS
* THE HUNDRED BLESSINGS: Pantheism honoring all the gods at once.
* THE OLD WAYS: Druidic faith focused on cycles of rebirth and retribution.
* WITCHES, WARLOCKS: Tradition of mortals binding themselves to nearly-forgotten celestials.
* THE CULTS: Crazy people worshipping things they shouldn’t be worshipping.
* THE DRAGONS: Destroyers sent to ensure the evolution of quality. 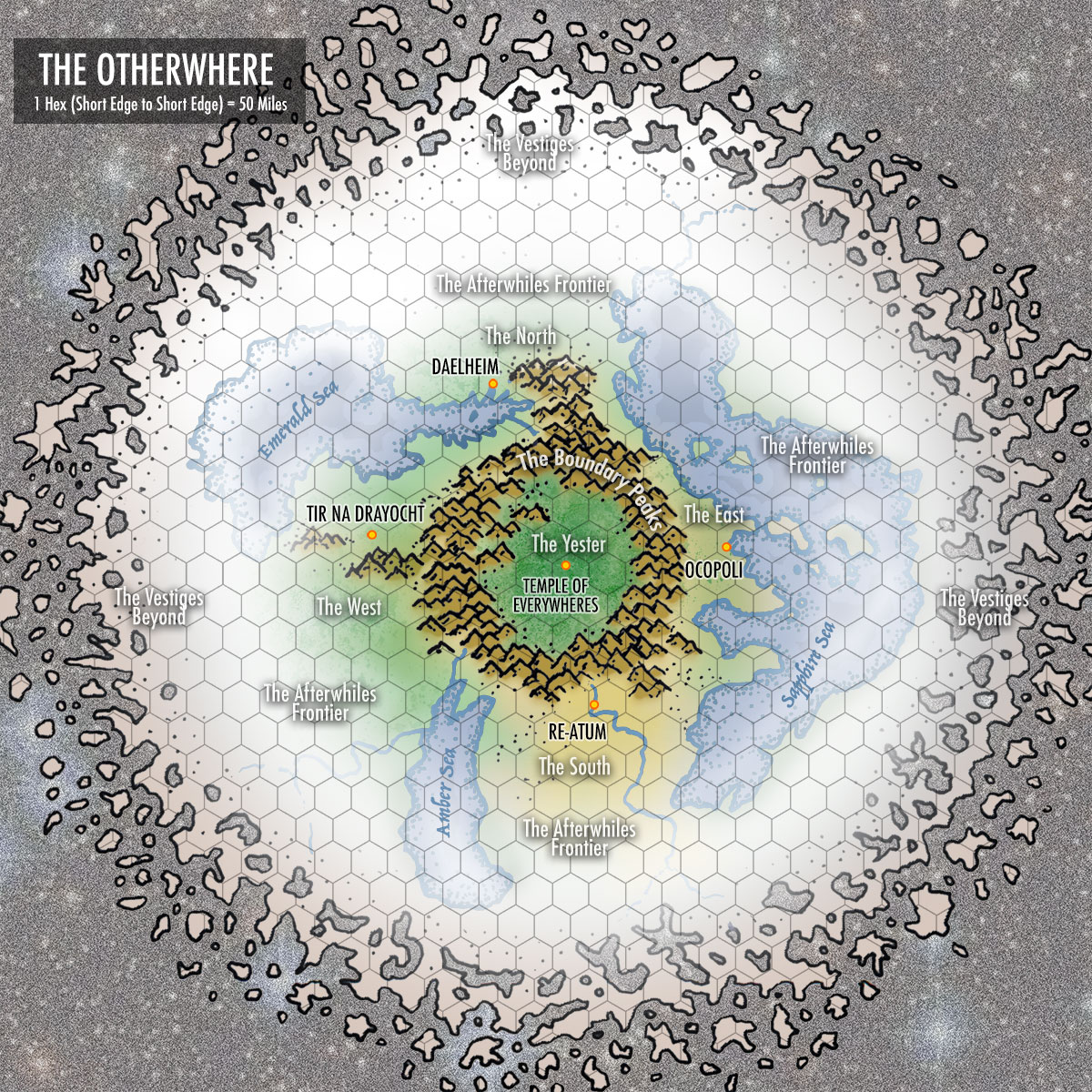 Several thousand years ago, magicians from a place called “Atlantis” either found or created the demiplane of Otherwhere, a physical realm adrift in the Astral Plane. Some say these magic-users sought a timeless preserve to store knowledge and practice dangerous spells, while others say the decadent Atlanteans just wanted new lands to enslave and exploit. Regardless of intent, the Atlanteans’ planar empire collapsed when volcanic eruptions and elemental rifts wiped out the magocracy’s capital on the Earth island of Calliste exactly 3,628 years ago (an event known as the First Cataclysm, or simply “The Fall”).

Though suddenly isolated, the astral colony on Otherwhere survived and thrived for a time in the safety of “The Yester,” a bountiful plateau protected by impassable mountains on all sides. Then came the day of The Second Cataclysm: The land suddenly flooded, massive vines erupted from the ground, and almost every building was smashed into rubble by fast-growing trees. No one knows who or what caused “The Bloom,” but it was a death blow to any legacy of Atlantean rule on Otherwhere.

Centuries later, scattered human nations have rebuilt their own societies in different regions just beyond the Boundry Peaks. Though independent from each other, these lands share common trade languages, magic traditions, divine prophesies, and even a few demiplane-wide organizations. All peoples worry about The Third Cataclysm, a doom predicted to strike Otherwhere any time now…

THE WARDENS: A global league that promotes law, order, authority, harmony in society, and tight control of magic. They employ all manner of adventurers – including wizards but not sorcerers – who travel lands preaching why unrestrained spellcasting is dangerous. They believe the Third Cataclysm will be caused by a future abuse of magic that can only be delayed through their exacting crusade.
* Renown 1 … Warden
* Renown 3 … Magic-Eater
* Renown 10 … Witch Hunter
* Renown 25 … Justiciar
* Renown 50 … Justiciar-General

THE APOSTATES: More a movement than an organization, they promote chaos, freedom, empowerment of individuals, and open use of spellcasting. They believe magic is every creative being’s birthright and certainly not limited to use by “the gods.” While the future Third Cataclysm is inevitable regardless of cause, they believe mortals will survive and must not lose understanding of magic in the “dark ages” that follow. Apostates have invested in controversial “vampire lyceums,” protecting undead sages as a sort of “brain trust” toward future generations’ re-education.
* Renown 1 … Apostate
* Renown 3 … Doubter
* Renown 10 … Revealer
* Renown 25 … Enlightener
* Renown 50 … Most Free

THE KNIGHTS (aka THE KNIGHTS OF THE BLADE AND BOW): These elite peacekeepers and monster hunters organize into four regional orders, but their function is the same everywhere: Protect the balance between mortals of the inner realms and whatever horrors come roaming out of the dreamlands toward the edges of Otherwhere. They are generally mercenary and share no common views about the Third Cataclysm prophecy. A few infamous knights of dubious standing even work as bounty hunters and assassins.
* Renown 1 … Keeper
* Renown 3 … Squire
* Renown 10 … Knight
* Renown 25 … Master Knight
* Renown 50 … Knight-Commander

THE THEURGY COOPERATIVE: This loose guild of wizards controls teleportation circles connecting the four major cities outside the Boundry Peaks. They appear to be mostly mercantile in nature, though there are rumors of a secret or sinister goal among those leading the group’s business.
* Renown 1 … Apprentice Broker
* Renown 3 … Theurgic Broker (or just Theurge)
* Renown 10 … Walker Of Somewheres
* Renown 25 … Walker Of Everywheres
* Renown 50 … Walker Of Allwheres

THE FELLOWSHIP (aka THE FELLOWSHIP OF THORNS AND COINS): Otherwhere’s most well-organized thieves guild, its members steal from everyone but also aid the poor and support novice adventurers. They have “family” members operating in every settled region of the demiplane and, as a result, boast the best information spy network around.
* Renown 1 … Fellow Friend
* Renown 3 … Fellow Cousin
* Renown 10 … Fellow Brother/Sister
* Renown 25 … Fellow Father/Mother
* Renown 50 … Fellow Grandfather/Grandmother

THE LANDS OF OTHERWHERE

THE YESTER: Once the seat of an oppressive magical empire built at the geographic axis of Otherwhere, its civilization instantly fell 1,500 years ago when tropical jungles sprouted overnight from formerly temperate farmlands. This 150-mile-wide plateau is now dominated by dinosaur-riding tribes of humans, orcs, and infernal spiders. At the land’s center is found the Temple of Everywheres, a ruin containing unstable portals back to humanity’s “Earth” homeworld, other more exotic planets, and distant planes.

THE BOUNDRY PEAKS: This ring of impassible mountains encircles The Yester. Beneath its stone spires dotted with giant and dragon lairs are found underground kingdoms of dwarves and goblins. Such smaller peoples grow wealthy by mining for the rare ore called orichalcum and charging travelers for safe passage to and from Otherwhere’s central jungle lands.

THE NORTH: A cold and dry land populated mostly by humans of Norse and Germanic descent, as well as the divine-blooded aesir (aasimar) and vanir (eldarin). Natives along the frozen Emerald Sea also include svartalfar (drow), hill dwarves, half-giants (goliath) and rival clans of frost and fire giants. Feuding tribes settle slights of honor either on the battlefield or diplomatically during the annual jarlmoot, a gathering of elders hosted at the city-state of Daelheim. When not at war amongst themselves, Northern longboats carry raiders that terrorize vulnerable communities along the Emerald and Sapphire seas.

THE EAST: A warm and wet land dominated by the Sapphire Sea, home to sailor-nations of Greek and Persian descent as well as “demigodlings” (aasimar, tiefling, genasi) born from trists between mortals and gods. The dominant city-state of Ocopoli prides itself as an egalitarian democracy of freely-elected Archons advised by oracles and seers, yet avarice still corrupts many in power. Across the more wild coastal shores and islands are communities of centaurs, fauns, minotaurs, saytrs and storm giants.

THE SOUTH: A warm and dry land ruled by royal governors in service to their ever-young Necromancer Queen. Here people of Egyptian and Nubian descent tend the banks of The River of Life, a fertile strip winding its way through the desert just as the Nile did in their ancient homeland. At the distant edges of the land and along the Amber Sea, merchants sent from the capital city of Re-Atum carry out trade with cloud giants and various tribes of “chimeral” beast-folk (aarakocra, kenku, leonin, lizardfolk, tabaxi and yuan-ti).

THE WEST: This cool and wet land is rich with arcane energy coursing through its dense web of invisible ley lines. Here Celtic traditions thrive as humans live in close connection with elves and sidhe (“shee,” half-elves). All take guidance from religious orders of bards and druids. Within the realm’s colossal dark woods are found several enchanted peoples: faeries such as pixies and sprites, firbolg, fomorians, forest gnomes, hill giants, hobgoblins, ogres, treants, and trolls. The enchanted city-state of Tir Na Drayocht (“Place of Magic”) is entirely underwater, yet none who walk its streets need fear of drowning.

THE AFTERWHILE FRONTIERS: Surrounding the settled lands, natural laws twist and physical reality dissolves. Here storms of living dreams thought up by Otherwhere’s sleepers create a kind of psionic weather. Monstrosities and undead roam unchecked among wandering bands of shadow elves, a mystical people lost in exile. It is said anything that can be dreamt of can be found here, a constant call to desperate mortals’ greed and secret wishes. For some, their dark sins even create permanent nightmares known as Domains of Dread (the lands of Ravenloft).

THE VESTIGES BEYOND: At Otherwhere’s edges, the land breaks off into chunks of pure thought and drift away into the astral void. Nearly-forgotten celestial powers called Vestiges cling to existence here, each seeking to avoid oblivion by making pacts with the living in order to anchor themselves. Unworshipped deities, fallen angels, outcast fiends, insane fey and alien echoes of madness from elsewhere end up here – as do githyanki military posts, night hag covens, yugoloth mercenaries and the occasional astral dreadnought.

THE VOID: The Astral Plane, a timeless silvery expanse of pure mental thought between the spiritual ideals of the Outer Planes.

THE HUNDRED BLESSINGS: A pantheistic faith more common in the East and South, this tradition’s followers honor all the Celtic, Egyptian, Greek, Norse and nonhuman deities listed in Appendix B of the D&D Player’s Handbook. Major temples honor all the gods, but small private shrines may aim to revere one specific deity. The faith’s name and common proverb, “a hundred blessings upon you,” comes from the idea that 100 deities watch over Otherwhere.

(In practice, the Hundred Blessings faith is styled more like Hinduism than Abrahamic traditions. Worship to “evil” deities is not “praise” but rather “a bribe to avoid wrath” since many “gods” manifest and interact directly with mortals. In many ways, individual gods are recognized in a manner closer to the way Roman Catholics view patron saints.)

THE OLD WAYS: The pagan druidic faith dominant in the North and West focuses on cycles (life, death, rebirth in harmony with nature) and karma (“evil deeds come back times three”). Bards also play a spiritual role in this faith, as do various folk rituals honoring local spirits (ancestors, animals, fey). Individual deities are often celebrated only on specific holidays or for specific prayer requests (“Thor, grant me strength against these giants”).

WITCHES & WARLOCKS: Individuals who enter into pacts with Vestiges so that such celestial entities may avoid dissolution into the mute nothingness of the astral void. Commoners’ views of them range from mild curiosity to outright suspicion and fear.

CULTS: Infernal, demonic, primordial, and alien cosmic entities often offer power and pleasure to mortals in exchange for helping the entity’s agenda – one that usually involves destroying society or the entire demiplane itself. Groups of such cultists tend to be small in number, but they can have a catastrophic influence when seducing major leaders.

DRAGONS: All the people of Otherwhere share the same sacred view of dragons: Such creatures were put in this world to destroy everything that lacks quality and to preserve that which embodies the highest quality. This dogma explains the draconic nature toward destruction and hoarding treasure, though “quality” also extends to knowledge, beauty, and works of magic. Dragons exist as a crucible to brutally improve the gods’ creations.

Though they appear as celestial objects, each is in fact a massive color pool (DMG p. 47) orbiting around the continental mass of Otherwhere. Suns circle to cause 24-hour days, moons are more complicated.