Related Posts:
About My Traveller Universe
Rules For Starship Combat
Rules For Psionics

Illustrations below are from The Traveller Book. 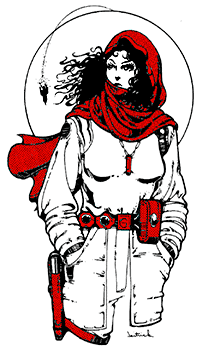 Most games of Traveller center around either a merchant crew with a 200-ton Beowulf-class Free Trader starship or a freelance soldier squad in an 800-ton Broadsword-class mercenary cruiser. Either group can be hired for missions taking them to remote star systems for fun and profit.

Although the human-dominated part of the galaxy is ruled by the Imperium, what happens down on individual planets is considered “local business” beneath the concern of the interstellar empire. Lots of trouble can be found between the stars, and there’s always someone rich willing to pay good money to someone else in order to deal with that trouble.

Traveller uses six-sided dice, typically adding the total of all dice rolled to measure success or results. Number of dice rolled are often abbreviated 1D, 2D, 3D or so forth (meaning roll one, two or three dice and add them together). For these rules, the common notation of 1d6, 2d6, 3d6, etcetera, is used the same way.

An “average” rating in a characteristic grants a +1 bonus to an action dice roll. A new character starts with +1 in each of the following six characteristics:

Optional Bonus Swap: Due to cybernetics, alien species, genetic engineering, planetary homeworld or other background, a character can start with +2 in one characteristic and +0 in another.
* If Strength +2, then brawling/blades attacks also does +1 die of damage per hit.
* Social Standing +2 indicates noble rank (baron or better).
* Social Standing +0 is reserved for criminals and robots lacking rights in society.

Aliens: Under these rules, species and homeworld of origin do not affect base characteristics. However, some species gain minor benefits over the “standard” baseline:
* Aslan: Dewclaw (as dagger, listed under “WEAPONS”)
* Droyne: Flight (same speed as walking)
* Hivers: Infra-red vision (see in low-light)
* Vargr: Bite (as bite, listed under “WEAPONS”) 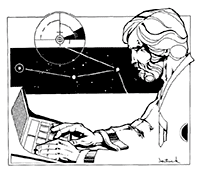 A new character starts with a total of six (6) points to be divided up as bonus points among two or more of the following skills. For example, a character may have one skill at +5 and another at +1, or three skills at +2, or any combination.

Some situations allow characters to attempt use of these skills without any training, while other cases may require a minimum of +1 bonus or higher.

NOTE: The above skill descriptions greatly simplify the skill lists found in other Traveller editions. For example, electronics, mechanics, gravatics, robotics, vehicles, computer use and programming (seperate skills in most Traveller editions) here all fit under the single “Engineering” skill.

Automatic Skills: Regardless of points in the various skills listed above, all space-worthy Traveller characters share the following common knowledge about getting by in the universe, typically without needing any dice check to use:
* Basic use of a vacc suit (standard issue spacesuit).
* Recognizing the major species of sophants (the “big six” alien races).
* Familiarity with routine starport procedures (screenings, inspections, cargo handling, etc.).
* Fluency in galactic standard language (Anglic).
* Familiarity with Imperial banking standards and currencies (credits, megacredits).
* Familiarity with Tech Level 14 technology (recognize and understand use, even if not proficient).
* General knowledge about the Imperium (domains, broad history, social status system).

Actions are revolved by rolling two six-sided dice and adding one appropriate Characteristic modifier (usually +1), one appropriate Skill level (+0 to +6 or more) and any situational modifiers called for by the game master (-1 or more, or +1 or more). For some ability checks, the skill and situation modifiers may be ignored.

Results Way Above Target Number: For tasks with a specific minimum task result total needed, if the total result (dice + modifiers) equal 6 or more above the target number, the result gains some sort of significant bonus. For example, a typical attack roll needs a result of 8 or more to hit, but a result of 14 or more earns improved damage.

Enhanced results can include any of the following (player’s choice):
* A task is completed in half the time.
* A task is complete for half the cost (in credits or use of fuel or parts).
* Extra information is learned from a person or data source (ask 1d6 extra questions from GM about situation).
* In combat, any rolled damage dice showing a 1 or 2 are rerolled until each shows a 3 or higher.

Rolling a 2: If a task check dice roll results in 2, some negative consequence happens even if the task succeeds due to high characteristic and skill modifiers. For example, a tool used in the task might break, a weapon jams or runs out of ammunition, an bribe attempt buys access but gets noticed by law enforcement monitors, a fraction of cargo turns out to be ruined or mislabelled, and so forth.

Rolling a 12: If a task check dice roll results in 12, some positive consequence happens, even if the task still fails due to high difficulty. For example, a missed shot hits a volatile piece of machinery near the target and catches fire, a negotiator refuses an offer but likes the character enough to later offer different help, a bureaucrat refunds application fees in full, a search for safe shelter instead finds a hidden cache of unrelated gear, and so forth.

Each 15-second combat round, a character can move 20 meters (about 65 feet) while performing other actions, or simply run 40 meters (130 feet). Actions include firing a weapon, piloting a starship, repairing a damaged control panel, and so forth.

The ability of a character to survive damage and trauma is measured by Life Points (basically same as “hit points” from other role-playing games). Most characters start with 21 life points that can be lost due to injury or disease. As damage happens, shock and trauma cause a character’s physical abilities to becomes impaired. Medical aid and rest recover lost life points and remove penalties.

Tougher Characters & Creatures: such physically enhanced beings with one +2 rating in Strength, Dexterity or Endurance have more life point at each health condition level, but recovery rules stay the same: Superficial Wounds (19 to 27), Light Wounds (10 to 18), Serious Wounds (1 to 9), Destroyed at “-28” damage.

Superior characters and creatures with two +2 ratings among Strength, Dexterity or Endurance have even more life point at each health condition level, but again recovery rules stay the same: Superficial Wounds (23 to 34), Light Wounds (12 to 22), Serious Wounds (1 to 11), Destroyed at “-35” damage.

Use the following distance benchmarks for setting range limits on weapons, communication devices and personal sensors.

Although using some similar terms, the scale of distances for use with starships is much bigger. 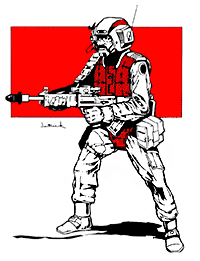 * Roll 2d6 + Dexterity + Tactics skill for initiative, highest results act first in turn order for duration of combat. (Do not re-roll each round for personal combat.)
* During each 15-second turn, move 20m and make action, or move 40m.
* An attack roll of 8 or more is needed to hit a target.
* Any hit does “X” number of 6-sided dice in damage, minus dice absorbed or deflected by the target’s armor.
* Damage that gets through armor reduces a target’s life points.

Use armor values to subtract dice of damage from successful attacks before rolling. If armor reduces dice to zero, the armor completely protects from the weapon. 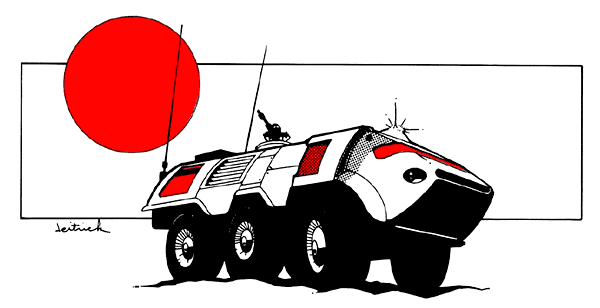 EQUIPMENT, COMPUTERS, DRUGS, TRADE AND COMMERCE, VEHICLES AND OTHER RULES NOT MENTIONED HERE…