Idea for a shared MacGuffin horror meta-plot across multiple games… 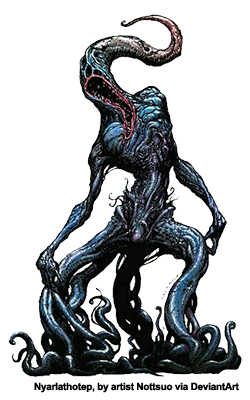 “The Entity” is a form made up of energies so alien to our reality or universe that it appears as “negative space” or a pitch black void, regardless of its size of shape. It most often appears as a mass of black tentacles, a featureless humanoid, or a mix of both. It’s intelligence is focused on encouraging mortals toward acts of destruction, entropy and annihilation. Some speculate it is trying to break down the natural order of this universe (or various universes) in order to allow other older cosmic beings to return to such spaces.

It is known by many names:

* Lovecraftian Horror/Call Of Cthulhu: Nyarlathotep, the Crawling Chaos, God of a Thousand Forms, the Black Man. Travels the Earth on a mission of destruction, may answer summoning spells cast by followers (witch covens in Salem and Arkham, Brotherhood of the Black Pharaoh in Egypt and so forth). In the stories of this time or dimension, The Entity has considerable freedom of movement. More ideas: https://en.wikipedia.org/wiki/Nyarlathotep

* Dungeons & Dragons: Tharizdun, the Elder Elemental Eye, the Chained God. Especially mentioned in the Greyhawk setting (planet of Oerth) where it was briefly worshiped by the drow priestess Eclavdra and studied by the evil archmage Evard. In the Forgotten Realms setting (planet of Abeir-Toril), elemental cults of destruction are associated with the Elemental Eye aspect of Tharizdun. The 5th edition D&D warlock option using a “old one” patron may choose this being. Regardless of campaign setting, The Entity appears to be greatly hindered in direct action due to its imprisonment and must act through agents and worshipers. 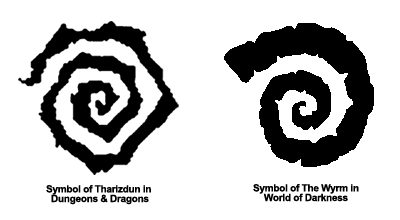 * World Of Darkness: The Wyrm, the destructive entropy part of the werewolves’ spiritual triat alongside the The Wyld and The Weaver spirits. 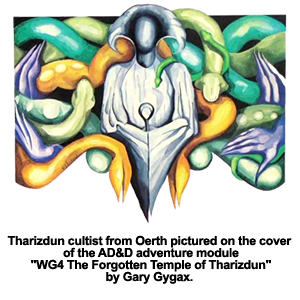