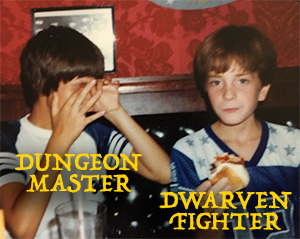 For me it began in a Milwaukee suburb back in 1982, picking up a copy of the Dungeons & Dragons basic set and letting Todd Green’s dwarf slaughter his way through the Caves of Chaos. The trinity of core AD&D books by Gary Gygax quickly followed, found on sale for half price at a local Target store whose management didn’t want “devil merchandise” found in stock.

I soon learned I had family friends in the area who were working for certain company in the nearby city of Lake Geneva, Wisconsin, and they wondered if I’d be interested in proof copies of new TSR products. (YES PLEASE.)

Down through the decades I would fill notebooks full of game ideas, clutter first hard drives and then scattered Dropbox and Google Drive accounts, leaving behind a wake of unfinished projects and one-shot game events run at game conventions big and small, and later at random bars and cafes across New York City.

Many friends have come and gone from my life, and a lot of them shared my love for tabletop role-playing game hobby. Many took it further, becoming professional game designers or working with various distribution. I can never thank them enough for sharing in the fun and frustration that RPGs bring to those who play them.

A look back a some past campaigns and game convention events… 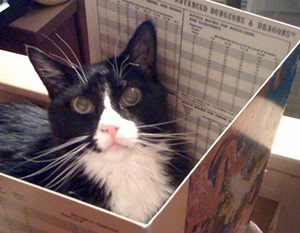 A wizard named Mad Aean gives powerful magical armaments to a dwarven warrior named Rammal to cleanse Saf Ifeebi, the so-called “dungeon of doom” which leads down to a flooded cavern city full of devils and demons.

A group of adventurers must escort a stolen magical silver sword to a wizard’s tower, knowing dragon-riding githyanki knights from the Astral Plane seek the blade’s return at all costs. A messy ambush fight atop a bridge proves costly to some, but ultimately the sword is delivered and placed safely within the wizard’s enchanted protections.

(From 1984 to 1986, I mostly just ran published modules, especially G3 Hall of the Fire Giant King, I1 Dwellers of the Forbidden City, N1 Against the Cult of the Reptile God and S3 Expedition to the Barrier Peaks. In college, played mostly Cyberpunk before launching a D&D campaign in the basement of my dorm.)

The City of Greyhawk wakes one morning to discover the sun has not risen. Days in darkness go by with a small band of heroes matching wits against a family of vampire mobsters, a performance troupe of wererat bards and four incompetent wanna-be adventurers. Eventually, a fallen angel and his demonic lover lead them all to an extradimensional stronghold at which the player characters are tested. Based on a chess move, the group’s choice will allow gods and magic to continue dominion over reality, or else make gods and magic fade so that mortals become wholly responsible for their own fate. The group chooses inaction, essentially allowing the world to continue under divine and magical rule. The sun appears again and life in Greyhawk returns to normal.

So I foolishly told all the gamers in my dorm that Steve Jackson Games’ GURPS allowed them to “play any character they could think of.” The result? A 20-person table which included the following player characters: Bill and Ted (of Bill And Ted’s Excellent Adventure fame); a Robotech mecha jockey; a Native American shaman; a guy with a really cool motorcycle (that was the whole concept); a samurai from feudal Japan; a elder vampire crimelord; a cybernetic data hacker; Mother Nature herself; and Jesus Christ. (Those last two shared the same body and would roll off to manifest on an encounter-by-encounter basis.) The whole entourage ended up prisoners on a starship (my idea), and escaped to discover they were trapped in Star Wars – not the universe of Star Wars, but the movie itself complete with projection issues and out-of-order reels (my co-GM’s idea). It was a mess, and ended after a couple sessions.

(Early 1990s, Vampire: The Masquerade becomes a big thing. I helped friends coordinate and stage some LARPs for White Wolf during big conventions like Gen Con.)

A professional trade convention serves as cover for a gathering of supernatural creatures, each with its own agenda. Several celestial beings discover agents of The Old Ones are attempting to bring alien eldritch horrors to Earth, and a search of recently published classified ads in that day’s local newspaper (a real prop) provide ritual details needed to stop the summoning. Also, two possible apocalypses in the future – one involving an invasion by demons, another causing humanity’s extermination from a robot uprising – are averted from ever happening due to changes made in the modern day past.

Harland Payne, a senior member of The Arcane Order, dies on Earth. During the reading of his last will and testament, magical items from his estate are contested by multiple supernatural creatures from across time and space. Ultimately a ghost finds peace by getting revenge against a vampire lord, a modern-day Faust escapes the hell cyborgs stalking him, and an angel and demon together find love.

Devils fighting in the Blood War steal a pair of nuclear missiles from Earth (circa 1984) and hide them for a time on the Astral Plane. The fiends then return to intentionally trigger a nuclear war between the United States/NATO countries and the Soviet Union, using the massive death toll to fuel a diabolic ritual against their enemies from the Abyss. However, while time in the mortal world is paused, a collective of modrons intervenes with the help of celestials from across the planes to ask a young godling which side should prevail in such a conflict. After deals and discussions, Earth is allowed to be consumed in radioactive fire.

Immediately following the end of the Fifth Frontier War, a reconstruction trade summit between the Imperium, the Federation of Arden and the Zhodani Consulate takes a deadly turn. An Imperial noble’s daughter is assassinated via a gene-disassembling poison, sending every faction scrambling to gain political advantage from the chaos. Negotiations get ugly as orbiting starships prepare for battle, but the Imperial delegation is decimated by more nanotoxins before any attack orders are given.

In the year 1971, a recon squad of U.S. soldiers in Vietnam are ordered to investigate tunnels the Viet Cong are said to be using 40 kilometers north of the Mekong Delta. Unbeknownst to the Americans, the cave-lined ravine is actually a dimensional portal guarded by orcs, hobgoblins and kobolds. Facing inhuman monsters armed with stolen Soviet firearms, the mission goes wrong fast and becomes a fighting retreat back to the soldiers’ extraction helicopter pick-up site.
» View Character Sheet

Deep in the heart of the Imperial-Zhodani demilitarized zone, the lonely world simply labeled 899-076 serves as a makeshift base for vicious mercenaries, trade route pirates, unregistered clones, deviant psions and other social undesirables. Near this system, vessel distress signals are met with hunger and violence, not mercy or protocol. As rumors of a coming Fifth Frontier War stir profiteers’ greed, a rouge AI “virtual crimelord” on 899-076 has put out a sectorwide call to share in maximum financial gains. Unfortunately, a nuclear strike from space cripples the AI and buries the bunker beneath a half kilometer of rock. Strangers are forced to work together to escape.

Set during the Biblical time of Judges, enemy groups of Israelites and Egyptians are forced to work together and stop the undead necromancer Jambres, who neither forgot nor forgave his humiliation by Moses in front of Pharaoh centuries before. The final battle becomes a running melee against the lich and its lamia archer servants through the streets and ruins of a long-abandoned Akkadian town.

THE ANGRY PAST (New World of Darkness in spring/summer 2007)

The leader of New York’s secret vampire community is slain, allowing her insane and immature vampire son to assume unrestrained rule as the city’s Prince. Politics rule the night as the Kindred protect their Masquerade against ever-increasing supernatural violence, including fires set by a group of Nazi demon spirits and the appearance of a huge undead worm-like creature in the city’s underground. The fragile ignorance of humanity is shaken as vampires fall into disunity, demons secure their hold in the mortal world and the worm horror withdraws deeper into the earth to foster its undead powers.

A magical corruption sweeps through the land, causing normal people and beasts to spontaneously transform into orcs and undead. A racist inquisition by Order of Purity crusaders attempt to blame such events on moral decay and the sin of non-human peoples, but a group of heroes vow to chase the real cause behind such misfortune. After several adventures, faeries help summon the archfey Auryeon, the Horned Father and King over the Court of Lost Regrets, who offers to stop the corruption by stripping magic from the world. The heroes agree to the offer, and the planet becomes devoid of enchantment and divine meddling.

A group of heroes journey to Sigil, the City of Doors, becoming involved in an ongoing feud between “The Elements” genasi street gang against “The Axiom” tiefling mob. Soon the adventurers learn several competing factions — the infernal duergar of House Grausamkeit, a troll baron named Sorrowfist, a mind flayer named Xoklaan, an elemental cult, several eladrin noble houses and three drow houses loyal to Lolth — are all seeking to unmake creation and find the secret to the “Ritual Primeval,” a multiverse-shaping spell tied to the cosmic nature of 27 children. Ultimately, thanks to a time-travelling paradox caused by one of the adventurers, the heroes use seven of the children to simply create a new demiplane built on the themes of healing, animals, music, war, luck, travel and knowledge.
Game notes…
» Player Character Heroes
» Party’s Loot Haul
» Campaign Background (Short Version)
» Gamelog Journal (Long Version)
» NPC Allies & Associates
» The Planar Children
The Bad Guys…
» NPC Villains & Rivals
» Noble Houses of the Drow

A four-hour, one-shot game of Original Dungeons & Dragons based on Warren Robinett’s “Adventure” cartridge for the Atari 2600 game console. Three deadly dragons and a black bat-like creature are known to roam the land, and only one of three warlords’ castles still stands as a refuge from the taint of chaos infecting this world. Returning the Chalice of Light to Brighthaven, the Golden Castle, saved the day. (The adventure was full of Atari cliches and video game call-backs, like the mushroom forest of the centipede, the caverns of Wor, the maze of multi-colored ghosts, the insect men of Yars and the giant frog ferryman at a dangerous river crossing.)

An invasion of aberrations collectively called “The Doom” sweeps west to east across a diverse continent of rival magical nations. After witnessing cultists assassinate the world’s greatest paladin, the royal sons and daughters of the realms join to investigate “The Doom.” The heroes soon discover something is mutating their world’s ground, water and sky into a sickening alien landscape populated by psionic fish creatures and giant insect-crab monsters. Even worse, divine powers are going missing and humans begin worshipping the enslaving monstrous horrors; there is no hope for salvation. Retreating to the farthest eastern city left free, the heroes enter the Vault of the Progenitors and unlock a time-twisting spell to wish away “The Doom” as if it never happened.