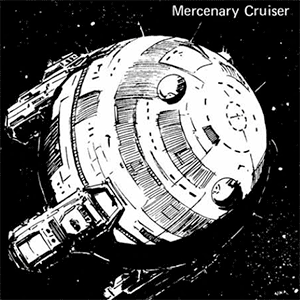 Mercenary Cruiser (type C): Using an 800-ton hull, the mercenary cruiser is built to carry small troop units for corporate or government operations. It has jump drive-M, maneuver drive-M, and power plant-M, giving jump3 and 3-G acceleration. Fuel tankage of 318 tons supports the power plant, provides one jump-3, and holds 48 tons in reserve for its small craft and for long term operations. Adjacent to the bridge is a computer Model15. There are 25 staterooms and no low berths. The ship has eight hardpoints and eight tons allocated for fire control. Eight triple turrets are installed, but no weapons are mounted. There are five ship’s vehicles: two modular cutters (with one open module and one fuel module), two ATVs (in ATV modules), and one air/raft. Cargo capacity is 80 tons. The hull is unstreamlined.

The mercenary cruiser requires a crew of eight: commanding officer, pilot, navigator, four engineers, and medic. Vehicle pilots, clerks, troops, and gunners may be added. The ship can carry 17 passengers (42 if double occupancy) in non-commercial service; its primary intended purpose is transport and support of small military (mercenary) units. The ship costs MCr445.95 (including 10% discount for standard designs) and takes 25 months to build.

DOWNLOAD DECK A (AVIONICS), B (GUNNERY) AND C (BRIDGE) 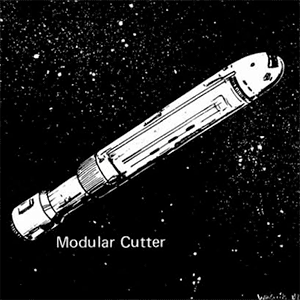 Modular Cutter: Using a 50-ton hull, the cutter is capable of 4-G, carries 2 tons of fuel, and has a crew of 2. It has 30 tons committed to special detachable modules; the craft has 2.5 tons excess space available for weaponry, computer, and possibly a couch for a third crew member. The cutter may mount up to two lasers; remaining weapons must be missile racks or sandcasters. The maximum computer for the cutter is the Model14. If a Model13 is installed, only one laser may be mounted; if a Model14 is installed no lasers may be mounted. The cutter, without any modules, costs MCr28.

Three interchangeable modules are routinely available for the modular cutter.

The ATV module (which includes an operational ATV) is 30 tons. It can land (and retrieve) an ATV on a world surface from orbit. The module can serve as an ATV storage location, if desired. It costs MCrl.8.

The fuel module, with 30 tons of fuel tankage, serves as a a fuel skimming vehicle and storage tank. It costs MCrl.

The open module is a customizable frame with 30 tons of excess space which can be allocated to passenger couches, fuel, cargo, cabin, or staterooms. It costs MCr2.