Way back in my college days, I picked up my third favorite D&D product of all time: The City of Greyhawk boxed set, published by TSR in 1989. (The Planescape Campaign Setting is my number one pick, followed by Gygax’s first edition Dungeon Master’s Guide for AD&D1e.) 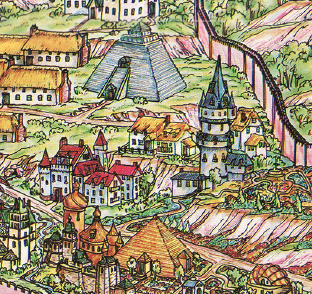 Inside the box came two booklets detailing dozens of NPCs, neighborhoods and organizations players could affect, along with a stack of one-shot adventures on single sheets of cardstock, but also four poster-sized maps of the city and its surrounding area.

The most stunning of these maps was Valerie Valusek’s painted illustration of the city, an isometric view of everything within the communities’ walls. Not only was her detail amazing, but the variety of styles shown ranged from onion-domed towers, to alpine cottages, to grand European palaces, to what looked like the Colosseum of Rome, to a vast marketplace of tents, to gardens atop ziggurats, to a walled-in pyramid that had a Tesla coil shooting lightning off its summit. Somehow the mixed jumble of architecture just said that no matter where in the world you came from, eventually your people would build their own place in this fantasy metropolis. (And again, even more so when TSR came out with the planar crossroads of Sigil in Planescape.)

There have been elaborate city maps in many other D&D products since then, but none made me take one look and wish that I was actually there like Valusek’s Greyhawk map.

The “key” to those buildings was found on a separate, very simplified map, and I always wanted to have a version noting each location directly on the illustration… so I made one.

Below are links to annotated versions of the Valusek poster, in various sizes. For explanations of each locale, see The City of Greyhawk boxed set, available from the Dungeon Masters Guild online store. 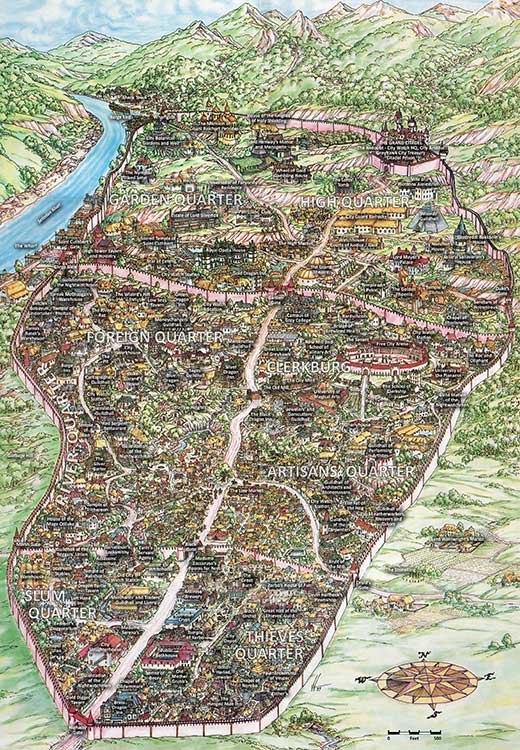