Focused on “science-fiction adventure in the far future,” the game involve merchants, mercenaries and other spacefaring heroes living among various rival space empires, about 2,500 years ahead of the current day.

When & Where…
* It is the Imperial year 1107, or A.D. 5630 by Earth calendars.
* “Known space” includes just a slice of the Milky Way galaxy. Galactic directions are spinward (“west”), coreward (“north”), rimward (“south”) and trailing (“east”).
* For the definitive interactive map of charted territory in Traveller, check out: https://travellermap.com/

Government…
* The Third Imperium (or just “the Imperium”) is made up of 11,000 worlds across 21 sectors; each sector has 16 subsectors containing dozens of star systems.
* The Imperium’s government is feudal. Networks of nobles rule the planet and make all local decisions. Senior nobles often field their own militaries.
* “The Imperium rules space, planets rule themselves.” Laws made by local governments vary wildly. “Federal” laws of the Imperium only apply within spaceports and military bases (which may cover an entire small world in some cases).
* The Imperial military mainly exists to protect commerce ranging from small free traders to vast interstellar megacorporations.
* Imperial navies boast warships 100,000-tons in size or bigger to fight pirates or monitor frontiers. All-out interstellar war is rare (once every couple centuries).
* The Imperial Scout Service is a non-military group aimed at exploring and updating library data about worlds.

Society…
* Capitalism drives society. There is no “prime directive” restriction. (“If you want to sell guns to the locals, go ahead but make sure you get something in return.”)
* Imperial society is human-centric, but cosmopolitan. Hundreds of alien species freely travel the stars.
* Psionic ability is rare and illegal within the Imperium, though secret Psionic Institutes do exist for scientific study.
* The spinward human empire of the Zhodani Consulate runs on psionics, a cause for mistrust by Imperials. There have been four major wars fought against the Zhodani, though Zhodani individuals may travel within the Imperium. (Imperials may wear anti-psionics helmets around known Zhodani.)
* The rimward human empire of the Solomani Confederation covers 2,400 worlds in 6 sectors, but about 1,000 formerly held worlds are now within the Imperium’s borders. “Freedom fighter” (Earth independence) movements are not uncommon.

Interstellar Peoples…
* The Vilani are the oldest and most common branch of humanity in the Imperium. Others humans include the Solomani of Terra (Earth), the psionic Zhodani (rivals of the Imperium), and many more.
* The most common non-humans species are the wolf-like Vargr, lion-like Aslan, starfish-like Hivers, centaur-like K’kree and small winged Droyne.
* The “big six” species all share the same environmental nature (oxygen-based atmosphere, water consumption, similar native gravity, etc.). 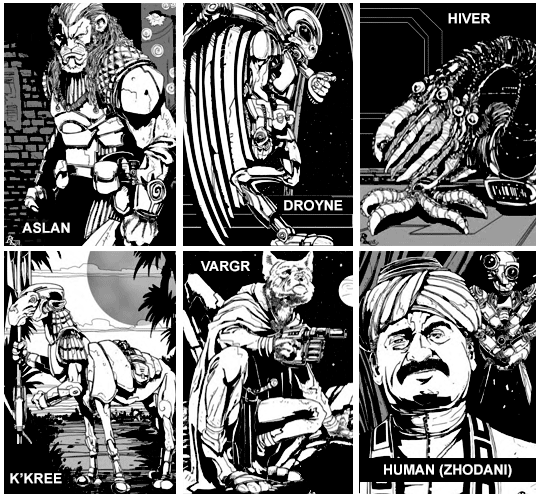 Technology…
* Communication between worlds is limited to couriers and messages carried by starships. There is no faster-than-light radio.
* Common starships include 100-ton scout ships, 200-ton free traders, and 800-ton mercenary cruisers (private military).
* Interstellar travel on starships is possible through the jump drive and jumpspace (aka hyperspace). There are no teleporters.
* Every interstellar trip a starship makes lasts about one week, moving from 3 to 20 light-years per jump (one to six parsecs).
* Typical technology mixes old and new (buckles and boots for clothes around antigravity cities and humanoid robots).
* Places with low technology often hire professionals with high technology to help deal with problems beyond local means.
* Computer technology and robotic sentience are intentionally hindered to prevent hostile artificial intelligences.
* Time travel, immortality and alternate dimensions are still things of myth and fiction.
* Unknown beings called “The Ancients” long ago spread humans across many worlds, genetically altered other species and left behind relics capable of such advanced technology they are essential “magic.” Sites and relics connected to “The Ancients” are very rare.

Adventures…
* Most campaigns focus around either a free trader crew (picking up goods and passengers to transport for profit) or a mercenary company (providing military-for-hire services where needed across the galaxy).
* Independent crews tend to be hired by a patron to deal with one specific mission or short-term problem, then move on to another system for new work under a different patron. (That said, there’s nothing wrong with a “permanent patron” such as a government or megacorporation.)
* Merchant crews missions involve taking cargo and passengers from system A to system B.
* Mercenary crew missions involve protecting a location, or raiding a location to recover or destroy property or individuals. Rescue missions, escorts and borderline espionage missions are typical since off-world mercenaries are usually not part of the local established military, police or political factions.
* Complications of traveling: http://epicsavingthrow.com/travel-what-can-go-wrong/

A FAST HISTORY OF SETTLED SPACE

(See below about future and alternate timelines.)

WHAT EVERY TRAVELLER KNOWS

All Travellers have past experience in an interstellar military group, the Imperial scout service, an off-world merchant group or some sort of dubious enterprise involving multiple star systems. Regardless of background, all characters share the following basic knowledge:

Traveller uses a special quasi-hexadecimal notation for numbers larger than 9. The letters “I” and “O” are not used in order to avoid confusion with the numbers 1 (one) and 0 (zero).

By way of comparison under Imperial recognition…

* Green Zone (or blank) … No major cautions about travel to this system.
* Amber Zone … Caution advised due to environmental or political trouble in this system.
* Red Zone … Restricted due to extreme hazards, unrestrained open warfare or quarantine.

OTHER VERSIONS AND TIMELINES OF THE TRAVELLER UNIVERSE

The above setting background is based off Marc Miller’s original game. Over the course of many writers and game editions, the “canon” timeline of the future Imperium changed dramatically…

Most published CT adventures took place in the Spinward Marches sector that spans the Imperium-Zhodani border.

MegaTraveller (MT, 1987): The default campaign setting sees the assassination of the Imperium’s emperor plunge the galaxy into fractured civil war. The game shifted a bit to a more military/espionage focus.

Traveller: The New Era (TNE, 1993): Amid the final months of the broken Imperium civil war, an artificially intelligent “virus” is unleashed as a super weapon. The “computer infection” spreads to almost all machine systems in the universe (starships, cities, robots), turning them against living things in a massive technological apocalypse. What scattered “clean” tech survives is used to explore the devastated galaxy. (This version reflected attempts to tap into the grimdark cyberpunk style that was in fashion at the time.)

T4: Marc Miller’s Traveller (T4, 1996): The game setting throws back to the earliest days of the Third Imperium when one pocket empire, the Sylean Federation, begins a campaign of interstellar expansion which would one day become the Imperium familiar in CT.

GURPS Traveller (GT, 1998): Loren Wiseman (a game designer and friend to Marc Miller) created an official “alternate universe” in which the Imperium’s emperor was never assassinated, the “AI virus” was not released and things as described in Classic Traveller continued more or less in a status quo with the past.

Traveller 20 (T20, 2002): Another game set in the Imperium’s “past,” this time a century before CT and focused on the Solomani Rim War and neighboring Gateway sector.

GURPS Traveller: Interstellar Wars (GTIW, 2006): Another game set in the Imperium’s “past,” this one focused on “first contact” between the Ziru Sirka First Imperium of Vland and the Terran Confederation of Earth.

Mongoose Traveller (MGT, 2008): A modernized rules set most closely set with the setting and rules mechanics of CT.