* GEOGRAPHY: The marshland is boxed in by the mountainous Land of Black Ice to the north; Blackmoor Bay leading into the Icy Sea to the east; the dangerous Cold Marshes to the south; and the pine and fir tree Burneal Forest to the west. (For details, see https://www.annabmeyer.com/greyhawk-maps/online-map-1/ and zoom in on the middle top of the map.)

* CLIMATE: In years past Blackmoor was a cold land with bitter winters but brief, three-month summers where temperatures averaged in the low 50s (about 10 C). Now it is an arctic storm always around -50 degrees (-45 C), with moderate to strong breezes pushing the wind chill down to -80 degrees (-62 C). Because of the volcanic heat below the ground, calmer days result in thick fogs covering the land. (“Current weather forecast: Gale-force blizzard with no visibility in parts of Blackmoor, and extremely frigid foggy gloom with no visibility in other parts.”)

* POPULATION: Only 1 in 10 people stayed behind after the seasons stopped. Of those left, 40% are humans of various backgrounds dating back about a millennia: native Flannish Tuocts peoples, the Zeai who came as barbarian raiders from the Suel Empire and Oeridians descended from Aedri pioneers. Among non-humans, 20% are orcs, 20% are halflings and the rest are elves, gnomes or others. Orc tribes roam the western Burneal Forest, usually met when raiding but of late open to peaceful trade, while their rival cousins from the Dragon Hills hold to a more aggressive stance. 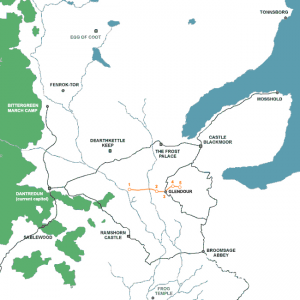 * SETTLEMENTS: Here are some known details on individual settlements…

– DANTREDUN: The “new” capital of Blackmoor, seat of Archbaron Bestmo’s reign and the largest settlement in the land. It survives by trade with the Weigwuir “wolf nomads” from the south and orc tribes in the Burneal Forest to the west. It’s influence and command over other settlements is tenuous at best.

– CASTLE BLACKMOOR: The “old” capital of Blackmoor, once a thriving port city but sacked by weird forces under command from the Egg of Coot more than 40 years ago. Long abandoned except for lingering summoned creatures, it was claimed by a tribe of orcs from the Dragon Hills just before the arrival of The Frostmaiden. The orcs allowed passage of merchant caravans through their claimed territory in exchange for high fees the invaders considered “taxes,” but such trade has now stopped.

– GLENDOUR: Blackmoor’s second-largest city, it is home to the Rhymer’s Asylum, a rare “Old Lore” college of bards. The settlement also has a dubious historical legacy for being the former home of a lich who seized control of the nation nearly 200 years ago. Despite his oppressive rule, natives of Glendour still speak with pride about his egalitarian nature and his victory in repelling an invading cult of genocidal “humans first, humans only” racial supremacists.

– BITTERGREEN MARCH CAMP: A fortified military outpost used by archducal patrols for watching against frost giants and activity from the Egg of Coot. Also used by trappers and tiger hunters who travel into the Burneal Forest.

– BROOMSAGE ABBEY: A monastery surrounded by a supporting village of lay people. The “Order of the Chroniclers” monks there revere Cyndor, the Oeridian god of Time, Infinity, and Continuity, they refer to all locals as “The Numbered.”

– DEARTHKETTLE KEEP: Not a settlement per se, now more of a landmark as the last standing tower of an old fortress. The tribal Tuoctish fen-folk scattered around the surrounding Gloom Fens are said to have a centuries-old working relationship with its current inhabitants, a covey of greenhags.

– FENROK-TOR: Druidic religious site of prehistoric standing stones. Like other sites of its kind found around Blackmoor, legends say Ur-Flan sorcerers used them to enslave fiends and elementals.

– THE FROST PALACE: Formerly a temple to Telchur, an Oeridian winter god, it is believed to have been either taken over or destroyed by The Frostmaiden when she first appeared there two years ago. The perpetual winter storms are much more severe and deadly around this location, and the road through its location is completely impassible.

– MOSSHOLD: A fishing port that was in decline even before the arrival of The Frostmaiden two years ago.

– RAMSHORN CASTLE: Old fortress ruins now claimed by a group of immigrant exiles who brought their families north from The Bandit Kingdoms. Their leader is said to be a powerful wizard who has ambitions to lay claim as a baron if the archduke ever recognizes new titles of nobility.

– SABLEWOOD: A small lakeside village that focuses on cutting trees and shipping much-needed timber to the capital city.

– THE EGG OF COOT: Stronghold of the mysterious being that has harassed and endangered the realm since before recorded history.

– FROG TEMPLE: Also known as “The Temple of the Toad,” it is headquarters to the north’s faction of Wastri cultists.

– THE HUNGER: Marshlands to the southeast beyond “The Lost Army” hills, known to be the hunting grounds for the ancient dragon Ignisvitrumsable (aka “Ebonfrost”). The dragon has been seen in Blackmoor for six decades.

* POLITICS: Control of the land has flipped back and forth between the Egg of Coot (a mysterious figure who conjures up mutant monsters) and a series of reigning Archbarons for the past 30 years. The old Baronial Council is believed to have been wiped out more than 40 years ago when forces loyal to the Egg of Coot seized Blackmoor Castle, leading to a chaotic time as the previous grand archbaron’s surviving infant son came of age over the course of 15 years later. That man, now Archbaron Bestmo, has reigned for the past 25 years – refusing to allow new sub-barons and instead simply having settlements share in a non-binding Council of Speakers. Since the coming of the Frostmaiden and her storms, what’s left of the independently-controlled outposts struggle on, some in new cooperation with their former orcish enemies.

* ENEMIES: Since before recorded history here, Blackmoor has been harassed and threatened from the north by the Egg of Coot and cultists from the Temple of the Toad (aka Cult of the Frog, or “froggies”) to the south. Due to its isolation, Blackmoor has had no political or military conflicts with neighboring kingdoms – and even Iuz the Old avoids sending his brutal forces this far north.

* CULTURE: People in Blackmoor tend to value individualism, independence and hard work. Zeai and Tuocts feel a strong connection to their land and their traditions, while Oeridians, orcs and dwarves are driven by opportunity.

* RELIGION: Locals strongly hold mainly to druidic traditions and a few Oeridian nature deities. Worship of other gods has waned in favor of mad calls for mercy and sacrifice to The Frostmaiden. Such prayers go unanswered.

* MAGIC: Spellcasting is well known, although few except local druids have mastered it. Both druids and foreign wizards note there is a strange eldritch energy source below Blackmoor, but its origin and nature are unknown.

* ECONOMY: Before the unending winter, Blackmoor was noted for producing walrus ivory, salt fish, copper, furs, and average-quality gems. Such trade still continues at a fraction of its former levels, though imports of liquor and some foodstuffs are still coming in. (Ice fishing and whaling are now the main means of sustenance.)

* TRAVEL: Neighboring settlements were each founded a day’s ride or two apart, and anywhere in Blackmoor could be reached by horseback in under a week. Now such rides are almost useless and isolated settlements require dogsleds or axebeak bird mounts to cross the icy terrain. On Blackmoor Bay, the port of Mosshold is frozen solid, but distant Tonnsborg remains open and oddly untouched by the great winter storms. On land, it takes a day to travel 25 miles with harsh overnight camping stays, and travel by flight is impossible over great distances.

* MONSTERS: In the past two years, the area has drawn yeti, crag cats, ice trolls, snowy owlbears, gnoll raiders, perytons, chwinga (elemental sprites) and the occasional undead. When the Egg of Coot is most active, his mad shocktroops called “qullan” terrorized humans and orcs alike, and other creatures of pure chaos are drawn from other planes. On a rare positive note, the winter storms have kept creatures from the Cold Marsh at bay.

(Over the next 80 years, Fadden and three others would lead as archbarons, always in contant struggle against the Egg of Coot.)

* 60 years ago … Last actual sighting of the obsidian dragon Ignisvitrumsable in Blackmoor.
* 43 years ago … Forces from the Egg of Coot take Blackmoor Castle; Baronial Council retreats into The Comeback Inn.
* 25 years ago … Archbaron Bestmo begins rule from Dantredun, forms Council of Speakers.

(Next 20 years sees ongoing skirmishes with mutant creatures sent by the Egg of Coot as well as clashes with cultists worshipping Wastri, the god of amphibians, bigotry and self-deception.)

* 3 years ago … Brost Bulem, “King of the Northern Orcs,” leads his warband out of the Dragon Hills into Blackmoor, eventually seizing control of the city around Castle Blackmoor and driving out the chaos creatures summoning by the Egg of Coot.
* 2 years ago … The Frostmaiden appears in The Frost Palace and slays the resident clergy of the winter god Telchur. The “Endless Winter” begins.
* NOW … Winter across the land has lasted for two years.